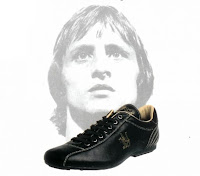 Johan Cruyff is possibly one of the most gifted footballers to grace pitches around the world. Unlike his rival top players Pele and Maradona Johan Cruyff never quite managed to win a World Cup despite being instrumental in the 1974 World Cup that saw his talented Dutch side lose to West Germany. A celebrated and much decorated player throughout his career Cruyff was the three times winner of the European footballer of the year award, or Ballon D’Or. After retiring from international football Cruyff decided to try something different, and in 1979 working alongside his good friend and famous Italian designer Emidio Lazzarini the Cruyff Classics sports shoe brand was born. Designer Lazzarini was responsible for the flexibility and comfort in each pair of Cruyff Classic trainers made while Cruyff himself was responsible for ensuring that each design had functionality and elegance that has never been seen in sports footwear before.
Cruyff’s designs and brand was soon seen on the feet of some of the most promising and gifted Dutch footballers of the 80s. Football legends such as Van Basten, Bergkamp, Vanenburg, Bosman, Winter, Hiele and Cruyff’s son Jordi were all seen sporting the famous football boots and even the range of Cruyff trainers such as the joggers and the indoor classics, both built for rigorous training requirements, yet allowed the technical footballers to train as they wanted to play. These famous names would be the inspiration for the future designs and styles and have even seen their signature shoe being remade into a modern day classic.
The Cruyff sports brand also branched out into other sports and the distinctive “C” logo could be seen on Hockey pitches as well as at the 1988 Seoul Olympics. The entire Dutch Olympic team was sponsored by Cruyff Classics footwear and clothing. A leisure range, much like todays collection, was also released into Holland and Europe, with Cruyff footwear and leisurewear capturing the imagination of the orange nation.
Cruyff Classics have been re-born in the past few years and along with a newly opened shoetique in Amsterdam and an outstanding array of retailers throughout the UK and Europe the popularity of Cruyff footwear is growing rapidly, with Mainline Menswear proving to be one of the largest independent retailers of Cruyff trainers in the UK. The fantastic remakes of the original designs such as the Vanenburg, Recopa, Indoor Classic and the limited edition Bergkamp Debuts have proved to be massive in the North of the UK and Scotland, with the South of England rapidly catching up. Mainline Menswear has a huge collection of Cruyff Classics, all featuring the famous name and the signature logo, if you haven’t tried a pair yet now is the time.