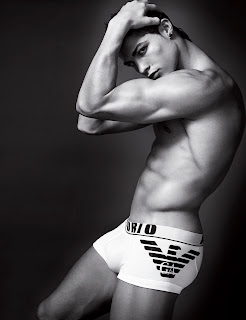 In recent years the designer underwear market has taken a huge upturn in the UK as brands including Calvin Klein, Emporio Armani, Diesel and many more have begun to promote their underwear as more than just the little extra that can be purchased with a pair of jeans, or for a present. The designer underwear collections around the world are now huge, with more money and famous faces posing in their pants than ever before. Back in the early 90s, Calvin Klein used movie star Mark Wahlberg to promote their boxer shorts and CK branded underwear.

Now some fifteen to twenty years on we see David Beckham, Cristiano Ronaldo, Raphael Nadal, Hidetoshi Nakata and Freddie Ljundberg have all been photographed with their sportsman-like bodies and a small pair of branded designer boxers, pants or trunks. This sort of endorsement has massively helped lift the designer underwear profile, and now in 2011, it’s one of the biggest selling accessories on Mainline Menswear. It beats everything in its path including wallets, belts, hats and scarves.

Calvin Klein first launched back in 1982, offering a premium men’s underwear range that carried the now famous CK brand name on the waistband. His success in the USA was pretty much instantaneous pushing the brand name to the forefront of the designer menswear world. Today, Calvin Klein is massive in 21 different countries and is seen and bought by an estimated 98 million people worldwide. When you break that down, it’s a lot of pairs of cotton boxer shorts, briefs, pants and trunks all carrying and endorsing the Calvin Klein brand name.

Calvin Klein once famously declared he would ‘forever alter the way the world viewed and bought men’s underwear. This statement couldn’t be more true and led the other top designer brands such as Emporio Armani underwear, Diesel, Hugo Boss, Ralph Lauren, Ted Baker, Dolce and Gabbana to sit up and take notice of what is going on, as well as influence underwear brands such as Bjorn Borg and Pull-In.

The designer boxers collections are growing at a rapid rate, and every year more and more boxer shorts, trunks, briefs and underwear T shirts are sold on Mainline Menswear. This takes it from being a luxury to a massive piece of the brand offering, especially for the winter season and Christmas. So if you’re looking for a new pair of boxers, a double or triple pack of your favourite brand’s underwear offering then now is the season to be picking up some of the best styles and colours around.

You can find a whole range of bright and eye-catching colours, alongside the basics that the top brands produce all year. Everyone looks for the staple black, white and grey underwear, yet the brands are changing things around a little with blue, green, yellow, orange, purple, red and even pink boxer shorts now seen carrying the top designer names around. This ensures that there is a little bit of something for everyone in 2011.